The APRIL Hero of the Month - Ronnie McCulley

It's that time again! Our Hero of the Month is Ronnie McCulley. Ronnie is a 21 year-old from Owasso, Oklahoma. 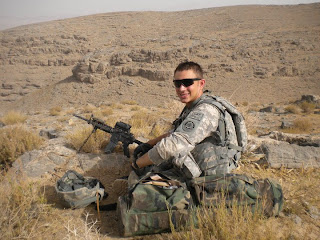 Ronnie spent six months patrolling the rugged mountains of Afghanistan until he was injured in October 2010.

At about 3 o'clock in the morning, Ronnie saw a few guys that were walking in the riverbed in front of him.

Before he could call for help, he was hit with an incendiary device. His entire body caught on fire.
Countless surgeries later, Specialist McCulley is home. A cane and compression bandages are the only signs of his battle wounds. Specialist McCulley expects to undergo even more surgeries, including one to amputate his pinky.
Perhaps my favorite thing about this young hero is his gratitude. Despite all that he has gone through, he continues to keep a positive attitude, while thanking everyone around him for supporting him.
"You see people who have it way worse. It was an honor and a blessing to serve my country," the 21-year-old said.
Personally, I think his father said it best, "He's always thanking people and really, we need to be thanking him".
Alright guys, you know the drill! Let's overload this hero with some notes of encouragement and gratitude!
Email us your notes/letters at theartofencouragement@yahoo.com
Please put HERO OF THE MONTH in the subject line. Also, include your name, age, and where you are from.
Send them in by April 20th at 11:59pm. We will take care of making sure Ronnie receives all of your amazing letters!
A hero contintues to be strong on the outside because it is their job; it is their nature. No one can possibly know of the struggle that wrestles inside the brave and injured men and women of our armed forces. Let's make sure they always have something to remind them that people are grateful for their sacrfice, even in their darkest hours.
We only received 33 letters for our last hero of the month, and we know you can do better than that! Share this blog with your friends. The more letters, the better!
DON'T DELAY!!! Send us your letters today!
As always, we love for our packages to come as a surprise to the hero! If you know Ronnie, help us keep the surprise going! Thank you!

Here are a couple of great news stories about Ronnie!

Posted by Ashley Hyde - The Art of Encouragement at 12:19 AM No comments:

Please help us afford to send thousands of Christmas cards and encouragement packages to our nation's heroes. We can't do it without your help!